There is often confusion around which channels may be used when deploying a Wi-Fi network using the 2.4GHz band.

Unfortunately, it’s not as easy as just using any channel that you might feel inclined to use. In short, the convention is generally to use channels 1, 6 and 11.

Why not the intervening channels (you may ask)?

The 11 (or 13) channels available on the 2.4GHz band are each 5Mhz apart. Wi-Fi communications requires a channel width of 22MHz to operate (the equivalent of 5 channels). We cannot use channels that are adjacent to each other, as we would get an effect called “adjacent channel interference”. This is a very bad thing in Wi-Fi networking, leading to very poor network performance.

You may have heard that is best for your network to use its own dedicated channel, which is true (when feasible). But if you find that neighboring Wi-Fi networks are already using channels 1,6 & 11, do not be tempted to try to use intervening channels for your network (e.g. 2, 7, 12). Co-existence on the same channels as nearby networks is better than trying to use other channels.

The generally accepted convention is to use channels 1, 6 and 11. I strongly advise that you stick to the same convention.

(Side note: You really should be leveraging the 5GHz band as far as possible for Wi-Fi networks — 2.4GHz is generally not a good choice in many instances in terms of Wi-Fi network performance)

Your fave smartphone or tablet will often support a number of different wireless technologies. Most people have heard of “Bluetooth”, “Wi-Fi” and “cellular”, but what is the difference between them? Wireless is wireless, right?

In addition to those mentioned above, there are also other lesser-known wireless technologies such as “Zigbee” and “Z-Wave” that you may also find in consumer-grade and commercial devices.

Each wireless technology has its applications, dependent upon its capabilities. Cellular technology is used primarily to provide cellular phone services around towns, cities and highways. Bluetooth, Zigbee and Z-Wave are used to provide close proximity services for devices such as wireless headsets, keyboards, door entry systems etc. Wi-Fi is primarily used to provide in-building data, voice and video services for laptops, tablets and smartphone type devices.

My area of interest is Wi-Fi wireless networking, so we’ll take a quick look at what makes a Wi-Fi device “Wi-Fi” capable.

All of the wireless technologies we’ve mentioned previously have earned their wireless technology classification as they have been manufactured to adhere to a particular industry standard. Many of these are defined by an organization called the “Institute of Electrical and Electronics Engineers” (or IEEE, for short).

The IEEE define standards that ensure that devices operate to a particular specification to earn their stripes as a “WiFi”, “Bluetooth” or “Zigbee” capable device. Based on these standards, manufacturers of smartphones, tablets, laptops etc. will included chip-sets and software that implements its wireless connectivity using one or more of these standards.

The standards are created by a number of standards committees within the IEEE and are given a number of rather cryptic numerical designations:

Going back to our original question, a “Wi-Fi” device is a device that supports the IEEE 802.11 standard. This is implemented within a device using a combination of 802.11-capable wireless chipsets and software. 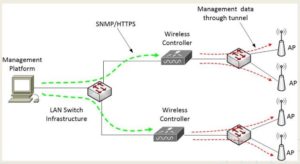 In episode 20 of the Wi-Fi For Beginners podcast we continue module 6 of the series, taking a look at Wireless Control and Management [Slides: Module 6: 16 – 24].
In this episode we look at: